You are here: Home / Updates / Directing Tips to Help You Get the Best Performance From Voice Over Artists 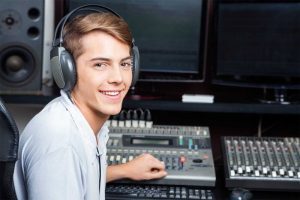 The person donning the cap of the director for a voice-over session has a tough job to do. He/she needs to communicate his vision to the voice over artist while remaining open to constructive input. And unlike the making of a play or a film, time is a scarce resource.

Every wasted minute adds to studio costs and nerves. Keeping that in mind, we have compiled a list of handy tips for getting the most out of voice over artists, whether it is a long distance or an in-person session:
1. Who’s speaking? – This is the first thing any voice-over artist expect to hear from the director. If you want the intended impact, you need to clearly characterize the persona of the voice. Is it that of an impassioned preacher, a neutral bystander, a helpful teacher, a wry humorist or a smiling enthusiast? If you are finding it difficult to get the performance you have in mind, change the instruction. For instance, if the scene calls for a king attempting to calm his warriors and you are not making any headway, suggest the persona of a guru teaching meditation to his disciples.

2. Who’s being addressed? – The gender, age, socio-economic bracket and geographic region of the intended audience are all key factors if you want an effective performance. You do not want the same kind of delivery for baby diapers and arthritis medication. Effective communication is the end goal. So make sure that the voice-over artist has an accurate picture of the target audience.

3. How’re they speaking? – Give clear, descriptive directions like “surprised, excited, certain, reluctant, exasperated.” The clearer your adjectives are, the better your final results will be.

1. Line reads – This is when a director reads out a line and asks the voice-over artist to repeat it the same way. There is nothing wrong with a line read, but once you read out the line, ask the actor for a different interpretation. You will be pleasantly surprised with the results.

2. Vague phrases – A good example would be when the director tell the actor to make it sound “more conversational”. It would be better if you say “Toss off the phrase like you have discussed it a thousand times” or “Speak directly to me”.

So, to sum it up, with specificity, context, receptivity and mutual respect, you will get the best performance out of your voice-over talent.