You are here: Home / Uncategorized / I think I’m terrible and so do I. 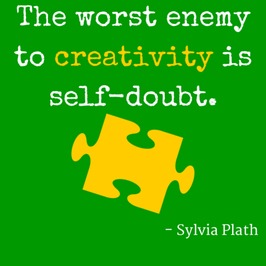 “Get out of my head!!!“, I screamed to myself while looking over copy.  While this might be the actions of a delusional person (and maybe slightly), it needed to be said at that moment.  I couldn’t shake it.  And whatever “it” was, it couldn’t be identified!  So yelling loudly seemed to be the only option.  Didn’t work.Self-doubt, insecurity, static, confusion, uncertainty…whatever you call it, we all get into our own heads from time to time.  Especially as performers!  Be honest!  We need the affirmation!  We crave it!  And no matter what the medium is, whether on-stage, voice over, comedian, film, or tv; getting lost in our minds can be devastating to a project.  Plus, it doesn’t just stop with acting, insecurities spill over to freelance creatives as well.  Recently, I was having a chat with a VO colleague about “letting go”.  She was talking about the online marketplace and getting a little discouraged about not booking work.  I could see some pain and self-doubt in her eyes.  That crushed me!  She’s very talented, (although hasn’t totally found her voice yet because she’s fairly new in the game), but still has the chops!  I told her to just “throw it away”.  Once you send an audition, just forget about it.  Don’t let the “what-ifs” or lukewarm ratings get you down.  There is so much more substance behind why you might not be cast.  So who cares!  It’s not something to dwell on.  Move on!  I could see a little weight lift off her shoulders.Ok back to my mess.  Why was I in my own head?  I DON’T KNOW!  Was I thinking about rearranging the booth setup?  Was my agent going to call me back about the spot I was on hold for?  Do I need to eat more fiber?  What’s that sound?  Should I change my shoes?  At the apex of my implosion, I was on the phone with my voice over coach.  She could tell I wasn’t right.  And then she yelled at me.  Not in the way you’d yell if someone just cut you off, but in the way you want a coach to get after you.  She was right.  I was alone with my own thoughts, stewing, not thinking about the copy, characters, connecting, or anything.  I was just being a void with a voice.I needed to decompress and take a little of my own advice…just let it go and move on!  I’ve found a few ways to get myself right again and they might work for you.  Or at least put you on the right direction:

So now what…well let’s just say it took most of the night but I got out of my own head.  I even ended up booking a job where I got to flex some character chops, and that made me feel great.  I know the self-doubt demon will rear it’s head again, but sometimes you just gotta take a deep breath and scream…“SHUT THE HELL UP, ME!!!”