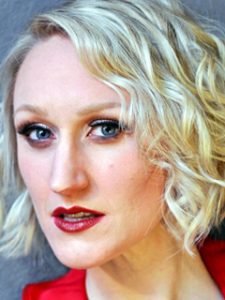 How long have you been a Voice Actor?

My first official voice over job was actually when I was in the 4th grade.  I recorded voices for a puppet show that played regularly at a children’s amusement park called Fairyland in the San Francisco Bay Area where I grew up!  I also had my own “pretend” radio show that was broadcast from my childhood bedroom floor.  Many famous guest artists, including my little brother and stuffed animals would join me for special interviews.

How did you get into the business?

I got started in the voice over business when I was working for Cox Media in Santa Barbara, CA in 2005, on the advertising sales side of the business.  The producers would pull me into the studio to voice local commercials.  I ended up working in television advertising again for nearly a decade as a Senior Account Manager in Oregon for a company that owned the local ABC, CBS and cable affiliates.  I was asked to be the voice of many of their stations, promotions and the company itself.  This got me thinking about pursuing this as a full time endeavor.  I have been full time for over two and a half years now.

What are some of your favorite projects?

I am currently the voice of Pandora Jewelry for all of their TV and radio throughout the US and Canada.  In addition to loving their jewelry, I also love the scripts and working the client, production team and agency!  Most recently, through Agent 99, I worked on a national commercial for Boston Market – and that was a blast as well.

Last year, I had the opportunity to be the voice of a young character named Fennec the Fox for a company out of Russia doing the English version of their children’s story and interactive book.  I love creating characters and new voices outside of the commercial and radio work that makes up the majority of my business.

Do you have a Voice Coach and why?

I was a vocal performance major in college and have studied voice, diction and languages since high school.  I currently sing with Opera Idaho and I still work with coaches who help me with technique, diction and acting, but I do not work with a coach specifically for voice over.  I have found that a lot of my musical training has translated really well into this industry.  That being said, I am actually pursuing some new coaching at this time for just VO as you can never stop learning and getting better at your craft!

I primarily use my Neumann TLM 103 for most of my vo work.  I have DT 770 Pro Headphones and use an RME Babyface as my audio interface while working out of Reaper. I spend a good chunk of my days in a vocal booth from vocalbooth.com and have Source Connect, Skype, phone patch and ISDN bridge capabilities.  Sometimes, I have company in the booth when I am not live with clients, as my two dogs (bichons) like to hang out with me in the sound “cave”.

What else should we know about Melissa?

I wake up every morning looking forward to my work and the variety of projects and auditions I get to do each day.  I love my job and I feel lucky to work with so many great clients.

Melissa is just one in the amazing roster of voice talent at Big Dog!  Post your voice over project today!